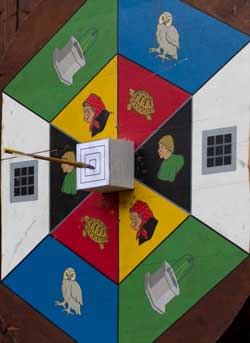 The crossbowmen shoot at a distance of 20 m from the target and have a single platform from where they can shoot. The target consists of a dice whose side measures 15 cm and is located at the centre of a wooden “Circle”; 4 concentric sectors are drawn on the dice grading positive scores from 1 to 4 whereas a central “Pin” having a diameter of 2,5 mm grades 5 scores. All around the dice there are 6 sectors in different colours with different symbols, which grade negative scores as follows: 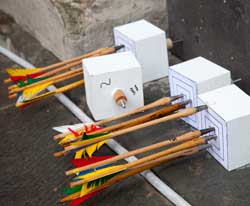 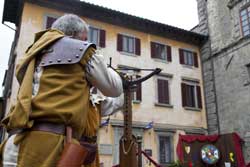 The shooting crossbowmen must never touch the arrows and cannot do anything before receiving the approval of the “Maestro di Campo”. Each crossbowman has 2 minutes of time to shoot the arrow. The time is measured with an hourglass from the exact moment when one of the two crossbowmen put a foot on the stairs to reach the shooting platform. He will cock the crossbow, take aim at the target and shoot. If the dice is not correctly positioned as compared to the original, the person in charge of assisting the crossbowmen (called “Maestro d'Armi”) of the Quarter that is going to shoot will ask the Maestro di Campo to reposition the dice. Then the shooting operations can be resumed. If the shooting is delayed, the quarter will get a null and the arrow will be immediately removed from the target and the hole left by the arrow will be immediately sealed. 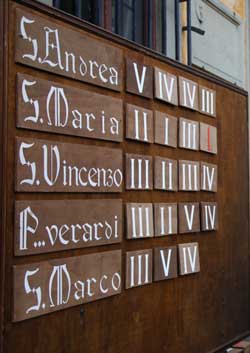 In order to mark a score, the arrows shall hit any sector. If the arrowhead touches two sectors, even minimally, the highest score will be graded; the arrows that will fall from the wooden “Circle”, either because they are hit by the adversaries or because the wooden shaft breaks down, will lose the score if it does not remain any part of them on the target so that it is not possible to identify the quarter they belong to. However, no one could touch the arrows before the Maestro di Campo's approval. 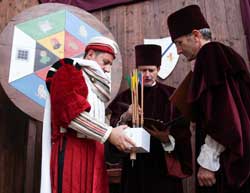 When all the five quarters have shot one arrow each, two JUDGES, whose judgement is UNQUESTIONABLE, will count the scores without removing the arrows from the target. The scores will be noted on a register and then communicated to the Maestro di Campo, who will ask the Alfiere to announce them to the audience. At the end of the joust, in case of tie, there will be a series of tie breaker shootings until one scores the highest score. The same shooting order and the same grading of scores will be applied. 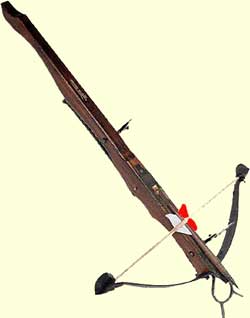 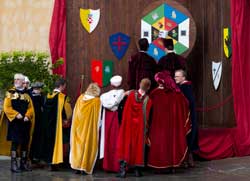 Every quarter can complain, talk to the judges, the Maestro di Campo or the Consul General about any issue concerning the execution of the joust, BUT ONLY through their own Consul. The Maestro di Campo will immediately disqualify the crossbowmen or the whole costumed representatives of the quarter up to the decision of making them walk away from the shooting area, in case of improper behaviour or breach of these regulations.