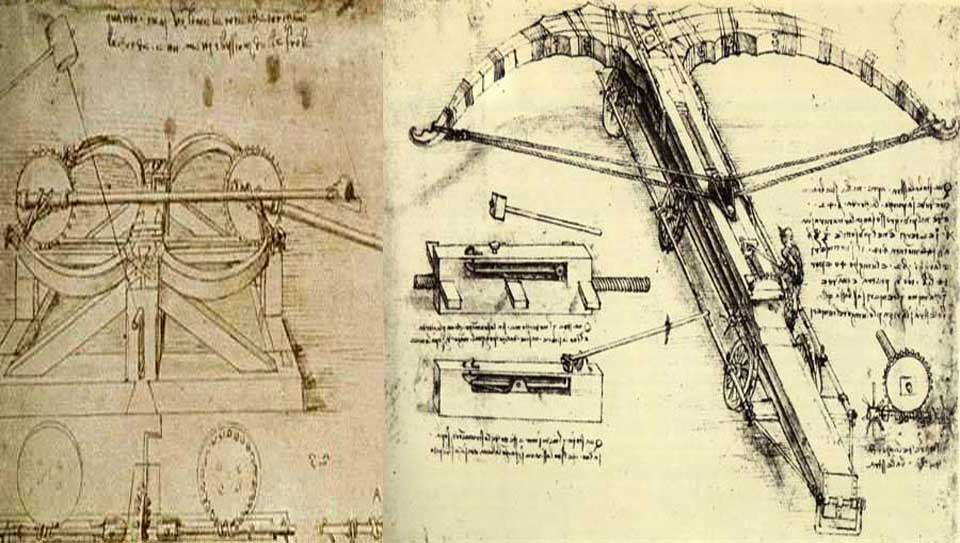 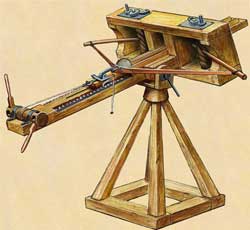 The Greeks used similar machines, called “ballistas”, which were war weapons that seem to be the precursors of medieval crossbows. Moreover, Alexander The Great used these weapons regularly during his campaigns (336-323 B.C.). The Greek ballista was made of a solid framework and its propulsion system was located on the fore part, within an open box. This one consists of a wooden bow made of two separate arms, which were tied to the box by two rod hanks: the bow was stretched by using a hand-pulley, which clasped the rod and drew it up until it was locked in place. Such a weapon could shoot an arrow of 500 g to a distance of over 400 metres having devastating effects.

Archimedes made build similar machines to defend Syracuse against the Roman siege (212 B.C.). These crossbows-catapults, starting from the 2nd century B.C., became part of the war machines of the Roman army. The Roman arrow shot with ballistas, as far as we know, was a dozen centimetres long, had a wooden shaft, did not have any fletchings, had a conical section and a square metal arrowhead, which measured nearly one third of the total length. The Roman crossbow makers, who first designed these arrows and who probably invented small portable crossbows that could be manually cocked, should necessarily have a huge experience and knowledge of aerodynamics.

Even if historical reports assured that the use of crossbow was widespread during the whole Middle Ages, it was extremely popular between the 11th and 14th century. During the first Crusade (1098) crossbows were regularly used by foot soldiers. This weapon had a wooden bow mounted on a stick and fixed with interlaced rods and was cocked manually: a stirrup placed on the front made cocking the crossbow easier by putting a foot on it to pull the string. Arabs, for instance, used a composite bow: the wooden framework was reinforced on the back (subject to traction) with animal tendons, whereas it had on the front (subject to compression) thin bone plates, which guaranteed a huge resistance to compression. The terrible injuries caused by a crossbow quarrel were considered as an act of savagery by the Church, so in 1139 the Lutheran Council banned its use, subject to excommunication, although it was still used against infidels. Richard I the Lionheart, King of England, was one of the few sovereigns to encourage the use of crossbow among his army and destiny willed that he was killed by a crossbow quarrel.

Afterwards, this weapon was mainly used to defend fortified places (castles, ships, etc.), where crossbowmen could cock the weapon and take aim safely behind towers and through narrow embrasures. The crossbow with steel bow, which guaranteed an unknown power, was invented at the beginning of the 15th century. The arrow that was most frequently used was called quarrel because of its geometrically-shaped metal head. The wooden shaft, which was nearly 30 cm long, had a fletching made of wood or metal at the end, which was usually tapered. Sometimes the shaft was built so that it could be adapted to the armpit. However, in most cases it was built to be rested on the shoulder. Once the rod was stretched, it was retained by an element called “nut”, which was located in a hollow within the shaft. The lower face of the nut was specifically shaped to be attached directly to the trigger. Until it was possible, crossbows were cocked manually by putting a foot on a stirrup and, eventually, using a hook attached to the crossbowman's belt, which was used to clasp the rod. From that period until the mid 1900s, apart from rare cases in which it was used for hunting or leisure, the old crossbow was and is still mainly used during historical commemorations and events.

The 20th century technological design using glass fibres has transformed this medieval weapon in a refined competition instrument for target shooting sports, launching a new discipline that has definitively dissociated this weapon from the ancient glories and ignominies of medieval life.